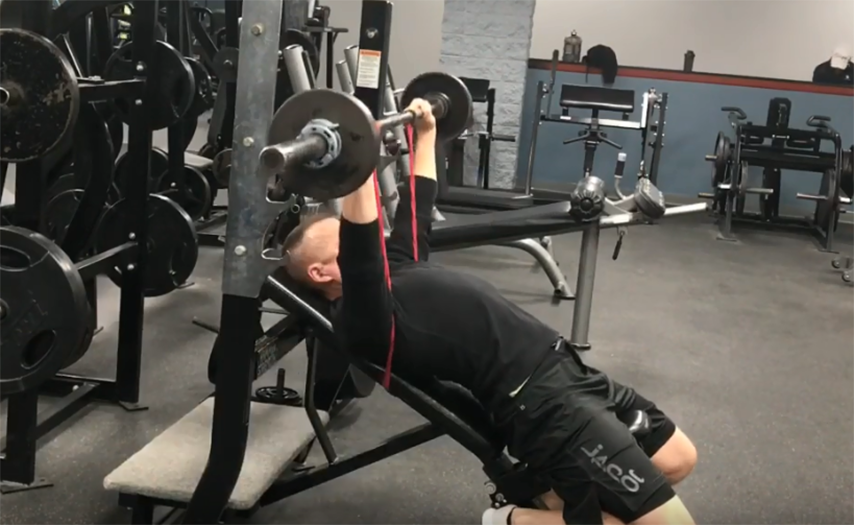 For active aging adults, who love to workout with weights, contrast band training is the easiest and most joint friendly way to keep weight lifting a part of your weekly workout routine without beating up and aging your body.

“Stop Beating Up Your Body Lifting Weights Only … Contrast Band Train and Start Feeling, Moving and Looking Your BEST”

Doing the band resisted exercise first activates the stabilizing muscle better and creates a safer warm-up effect. This makes it easier on the joints when free weight training is initiated.

To me this is one of the most effective ways to contrast band train. However, it may require more set up and a higher level of strength training skill. Typically the setup involves attaching bands to the actual free weight exercise.

For example, attaching bands to the barbell when doing squats or bench presses. However, it could also entail attaching the band resistance to the body and then performing the free weight resisted movement.

For example, using the crossover band setup with squatting. Regardless which approach is applied, the ability to work against both types of resistance simultaneously is the goal.

The #1 goal behind contrast band training as an active aging adult is to stimulate the nervous system using different types of resistance. Therefore, simulating the same movements with band and free weights is not necessary.

Another effective way to contrast train is to perform the primary strength building movement with free weight resistance. Then apply band resistance while performing the auxiliary strength movements.

For example, body weight pull ups followed by a band high attached pulling circuit. The primary pulling muscles are stimulated by the free weight resistance and then stimulated in different planes of movement by band resistance.

Band resistance is obviously more joint friendly than free weight resistance. This is why I will often contrast the two by performing a “primer workout” that is synergistic with the movement or muscles I plan to train that day.

A good example of this is my regular overhead pressing and pulling day that includes some type of free weight overhead press or pulling movement. On these days, I will always incorporate a 30 on, 15 off interval band circuit that includes the following exercises: