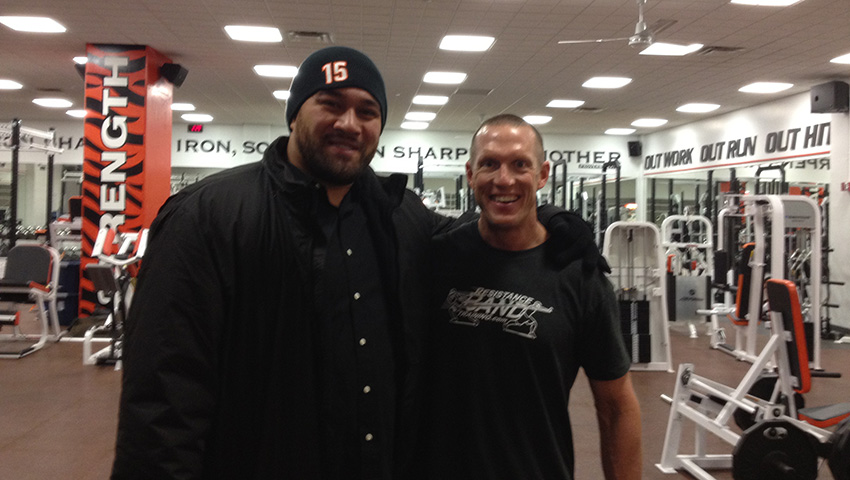 There are several high profile NFL athletes who are using Resistance Band Training (RBT) to keep their aging athletic bodies on the field playing the game.

Guys like Tom Brady and Aaron Rodgers have publicly stated that RBT is a key element in their year-round training program. Plus, if you watch any highlights from pre-season training camps or pre-game warm ups, you will frequently see resistance bands being used in various ways including flexibility, speed training, muscle activation and metabolic conditioning.

Why Bands vs Free Weights??

As athletes age, staying on the field and avoiding injury becomes a higher priority than increasing strength. Resistance bands provide several benefits and advantages over free weights that make them a far better training option. Over the years, I have discussed some of these training strategies separately. Today, I would like to take a closer look at 9 specific reasons why high profile aging football athletes are choosing Resistance Band Training over free weights.

It has been proven that free weight training that applies a “constant resistance” on an active aging body will create muscle and tendon inflammation. Resistance bands provide a “variable resistance” that has been shown to create far less post exercise-induced soft-tissue inflammation and stiffness. As a result, aging athletes can still strength train during pre-season and in-season without having to apply additional soft-tissue trauma that is already being amplified through daily practice and game competition.

3. Squatting can be done with significantly less low back compression

Squatting is the granddaddy of lower body strength training. However, having to constantly barbell or dumbbell squat can apply significant joint compression to the lower back. Being able to squat with a variable resistance band significantly reduces lower back compression at the bottom of a squat where most squat injuries occur. Plus, by attaching bands to a squat bar (referred to as contrast training) it reduces the need for high barbell weights. This, in turn, reduces the forces on the low back.

Barbell or dumbbell bench pressing and overhead pressing are two foundational strength training movements that become challenging to perform with active aging shoulders and specifically the rotator cuff. Fortunately, the pliability of a resistance band allows the pushing and pressing movement patterns to be modified into a more rotator cuff friendly pattern.

Plus, the variable ascending resistance of a band requires less muscle force production at the start of the concentric phase of a push or press. Knowing that most rotator cuff injuries occur at the beginning of the concentric phase, training with bands alone or contrasting bands and free weight resistance will dramatically reduce rotator cuff forces and the risk of injury during training.

5. Resistance bands can train all aspects of performance

Most NFL athletes have reached a high level of success because they put in the time both on and off the field. However, once they reach the professional level, a greater demand is placed on them with film meeting time. Subsequently, finding the time to train becomes challenging. Having access to a training tool that can be used anywhere, anytime to train all aspects of performance becomes important to keeping an active aging body functionally fit.

Resistance bands allow athletes to train foot agility, strength, flexibility, power and core stabilization without having to change tools. Plus, their light weight construction allows them to easily go on the road with the team. As a result, players can become more efficient at managing their actual training time.

High performing NFL athletes have identified the importance of muscle mobility (flexibility with stability) as it relates to building in what I refer to as “a margin of error.”

Specifically, they have identified the impact of keeping the mobility of the ankle, hip and shoulder at optimal levels so they can move freely while expending less energy doing it. A bands elastic quality provides athletes with the perfect training tool to passively over pressure stretch and mobilize muscles surrounding the hip and shoulder.

However, bands also provide end range stretching with every single strength training movement as long as tension is maintained on the band throughout the entire exercise pattern.

7. Resistance bands are the only tool that trains athletes to be 3-D strong

Strength training in all planes of motion and eliminating weak links is the key to injury prevention. The most successful aging NFL athletes understand that strengthening the weakest link in the kinetic chain is the key to staying on the field. That means they must strength train in all 3 planes of movement using force vectors that impact the body in all 3 planes. I refer to this as being 3-D strong.

To accomplish 3-D strength requires training with a tool that allows the body to strength train in the sagittal, frontal and transverse (rotational) planes. This same tool has to be able to apply resistance to the muscles following a vertical, horizontal and rotational line of force. Flat continuous looped resistance bands (not free weights) are the only tool that has the unlimited resistance and durability to challenge an NFL athlete to develop 3-D strength.

Successful NFL athletes are genetically very powerful and explosive. To maintain that power and explosiveness throughout their career, they have to continually strength train their body using variable resistance that allows them to accelerate force. Not just lift weights. Resistance bands’ ascending variable resistance provides them with the ability to change up rep speed. This, in turn, allows them to train acceleration and power.

95% of all injuries occur as a result of the body’s inability to neuro-muscularly decelerate eccentric movement. To optimally train deceleration, the body must be trained using accelerated momentum forces. In other words, muscles are taught how to control movement that is accelerated.

Resistance bands’ ascending resistance has the capability to speed up or accelerate movement by placing the band on stretch and then asking the body to quickly move to unload the stretched band. This quick unloading of the band is called “accelerated eccentrics.” It’s the perfect stimulus to train the body how to decelerate at high athletic speeds which are often seen every Sunday in the NFL.

Why Bands Make You More Athletic

High profile, successful NFL athletes are gifted individuals that get older just like you and I. Like you and I, they have to learn how to modify their training to keep their body “Game Ready”. Resistance band training (RBT) is playing a bigger and bigger role every year in helping them stay in the game. Hopefully, after reading this article you can see, for many of the same reasons, how RBT can be used to keep you performing well in the game of life.

Game Day Ready is a Great Place to Start 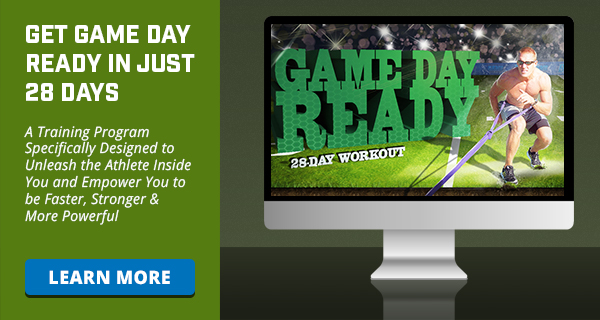 Want to learn how to use RBT to bring back your athleticism??? Join me in The Band Gym and let me coach you every week for 1 FULL YEAR.