Quantum bands are manufactured at the highest quality standard using 100% latex (No pencil eraser filler) . They are manufactured in layers using a “Latex Bonding” process similar to how a car tire is constructed. This continuous layering process substantially increases the strength, elasticity, and durability of the band by creating a matrix like construction similar to a burlap bag but with the ability to remain pliable.  This matrix construction also  prevents the band from thinning out with repeated use which is the case with cheaper manufactured  molded or dip layered bands.   Flat layered bands, like the Quantum Band, is approximately 30% more expensive to manufacture than a flat molded band which is why layered bands are typically more expensive.  However when considering a Quantum Band is 400 times more durable and has a training life expectancy of approximately 3 years, depending on use, it becomes well worth the cost versus having to replace bands on a monthly basis.

Another key difference between molded and layered bands is the tension training consistency (TTC).   TTC refers to the smooth consist increase of resistance a band should demonstrate as a greater stretch is being applied to the band during exercise.  Molded bands are created by pouring liquid latex into a mold and allowed to harden.   It is very difficult to maintain chemical consistency using this process which leads to high tension areas in the band.  These high tension areas create abrupt changes in resistance during training which  in turn leads to a “jerking’ on joints and muscles.  Since layered  bands are constructed using a actual layering process, high tension area are avoided and as result the band demonstrates a smooth TTC.

Unfortunately, from a consumer’s standpoint it is difficult to determine what is a high quality continual looped resistance band.  There are many choices when it comes to elastic resistance training tools which are all referred to as “resistance bands”.  However, the quality and characteristics of the different band variations vary wildly. Refer to the chart below to see the difference. 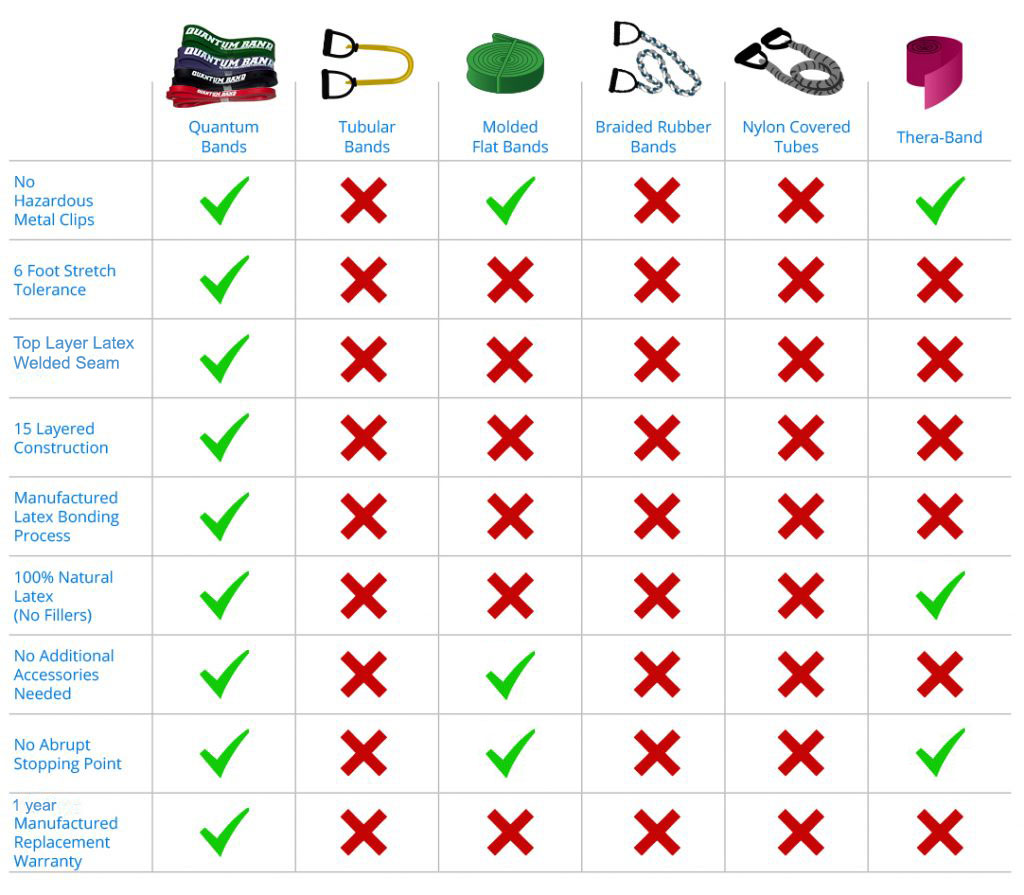 When you strength train with a free weight tool like a dumbbell – kettlebell – barbell or sandbag,  you’re training against a “Constant Resistance” that remains the same throughout the movement. With resistance bands, you’re training against an “Ascending Variable Resistance”  that progressively increases the further you stretch the band into the concentric ( or work) phase of an exercise. This is why all Quantum bands are listed as having a variable resistance range, instead of a set resistance. Please refer to our band chart to see the estimated resistances variance of each Quantum band.

As a fitness enthusiasts, especially those 40+, there are several advantages to strength training with an “Ascending Variable Resistance” as compared to training with a “Constant” Free Weight Resistance.    These are discussed further in Part 2 of the\ Series “Resistance Band Training vs. Lifting Weights” which you can find links to below.

I wish I could say a Quantum Band never breaks but since it is not an iron dumbbell or kettlebell, it is possible.    However since launching the Quantum Band in 2005,  99% of band breakage is a result of 3 scenarios.

3. Grinding the band against an abrasive surface like the floor when doing attachment free training.

All of these scenarios are easily avoidable with proper teaching and coaching which is the #1  mission of Resistance Band Training Systems. However, regardless how much we educate, training mistakes can happen and we realize this is part of the learning process.   That is why we have our Quantum Quality Customer Guarantee. If your band breaks for whatever reason, email us a picture of the broken band at support@resistancebandtraining.com. This helps us identify why the band broke and that it is truly a Quantum Band. If it’s a first-time incident and the band has not surpassed our Standard 1 Year Manufacturer Warranty, we will replace the band along with providing you recommendations on how to prevent future breakages.

Let’s Get Better With Bands