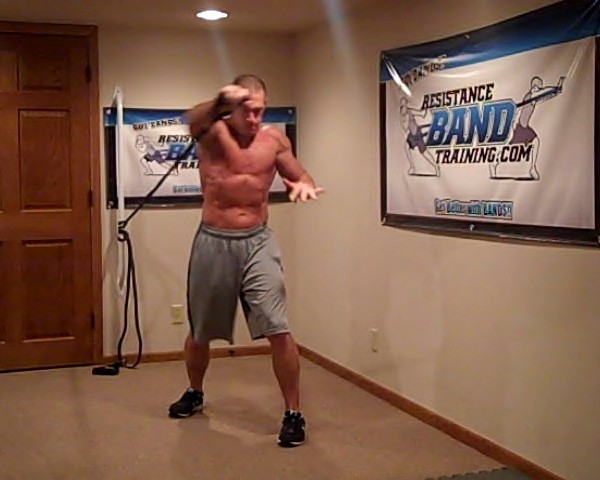 What Is it About Training with Bands??

It took me several additional months to figure out exactly what was causing these changes but it soon began to make complete sense the more I learned about how the body worked.

Here is what I noticed when I began training with bands versus only with free weights way back when:

I was able to generate greater force when my arms and legs were further away from my body. I had better peripheral stability because I was training with an ascending resistance that challenges me more at the end than at the beginning of the movement.

I had “Pop”—that’s what I called it. This was the ability to generate force quickly and with a higher level of intensity.  By using  a resistance that got harder the further I went into the movement, it taught me how to develop momentum as use my entire body to create force.

I was getting quicker with age. This came along with having better “Pop”. I was moving faster and with less effort.  Between improving my hip flexibility with band stretching and my quickness with short amplitude first step speed drills I was seeing a older guy getting faster instead of slower like all my weight lifting friends. 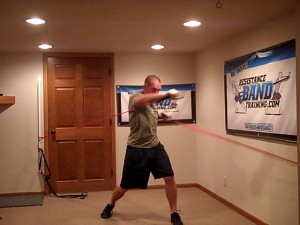 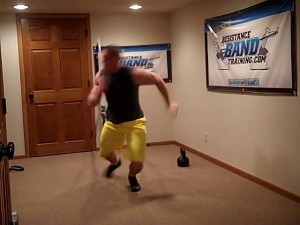 My power was increasing. I was able to jump higher and further at 38 than I could at 28. I  was increasing my ability to accelerate force at faster speeds because band’s variable ascending resistance allowed me to train at different speeds.

I was much more flexible and mobile (flexibility with stability) than I ever was when I was just lifting weights.  I could move in any direction and maintain great balance while doing it . Plus, I could do the splits as well as deep side lunges and squats, things I could not do even as a kid.  The band stretching allowed me to eliminate restrictions in all planes of motion , especially through my hips and shoulders. 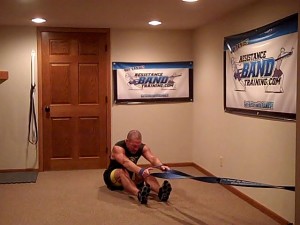 I looked forward to working out. I was training intensely but was experiencing minimal soreness through my joints and muscles.  My muscles and joints were not constantly getting overloaded with eccentric force like I was with free weight training, and I was constantly changing up movements patterns which eliminated muscle overuse concerns.

My workouts were never exactly the same which kept my body adapting. Results were coming faster and I was constantly challenged. I could easily train all energy systems, every plane of motion, and incorporate different movement speeds all while training fitness as well as performance based movements.  I had everything I needed with bands to get my body looking, feeling and moving better.

My abs were finally popping out. By training  horizontal vectors at different speeds along with applying more multi-joint movements, I was training my abs on almost every rep and definitely in every workout.  Ab muscle fibers run in multiple directions, especially diagonally. I could hit them better and more often in my workouts. Plus, I was using more high intensity, circuit based training to blast fat. 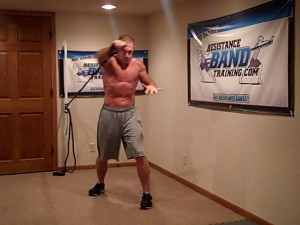 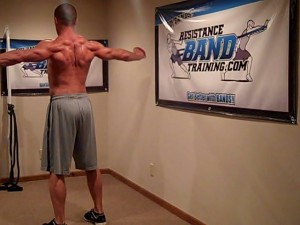 So what exactly was causing all these cool training responses and transformations that for years had not happen  with free weights??

The ascending resistance of bands was challenging my body’s neuro-muscular system in ways that fit how the body was wired up and how it functioned in everyday activities as well as athletic-based activities. As a result, I was not providing it an artificial exercises it did not recognize.   Bottomline…  I was using the body the way it was designed to move and work.

Lifting a free weight without question challenges the muscles of the body to become better recruiters which, in turn, causes them to develop size and strength. However, it can only achieve this at one speed while training along a gravity aligned, single plane force vector. It also cannot mimic or stimulate what happens neuromuscularly with daily activities which is variable speeds, multi-plane patterns of movement and the ability to integrate the entire body.

The body is a multi-plane, multi-force vector structure that can move at variable speeds while being constantly impacted by multiple force vectors.

The body is a reactor that will only adapt to the stresses being applied to it. The more “Real world” these stresses are, the better it will adapt to becoming a better reactor.

If multiple vectors, speeds and planes are not constantly being challenged with training, they become “neuromuscular dormant” which is exactly why when I was only lifting weights I was physically feeling tight, slow, very uncoordinated, stiff and constantly sore.

Looking back at pictures I looked thick, puffy, non-athletic with less than a desirable 6-pack ab appearance.

It probably does because I see this all the time. I suspect this is the case if free weights dominate your strength training program which for many is the case. It’s what happens when the body is only influenced by one stimulus that is not multi-dimensional.

Unfortunately, if the body cannot feel a difference, you have nothing to compare it to which is exactly what I was experiencing during all those years of intense free weight training. It’s the same for anyone else that follows a free weight dominate training program.

Getting started with a resistance band training program that is influenced by an “ascending resistance” will quickly change how your body looks, feels and moves. The key is to let your mind  be willing to open up to another form of strength training that will ultimately allow this transformation to happen.